Painted in aluminium rich paint (a standard roof finish in New York), Richard Wentworth’s Agora, commissioned in 2015, covers the entire surface of the car park. Mirroring the ever-changing weather conditions on site, the reflective design unifies and activates the space. The deceptively simple patterning has been compared to silvery snail trails as much as the decorative energy of Southern Europe’s traditional paving and textiles.

The work pursues Richard Wentworth’s long held passion for the meeting point between spatial conditions and social reality. Agora, a Greek word for gathering place, also shares an etymological root with ‘gregarious’, highlighting the work’s ambition to bring the space to life for the many people who come to visit. Agora emphasises the ‘polis’, the way we behave collectively in the city. Ironically, while we stand on Agora, probably in conversation, we can also witness the city which harbours us.

Richard Wentworth (b. 1947, Samoa) lives and works in London.

The title and message of this ten-storey staircase hi boo i love you represents the heartfelt anxieties of love: “I can’t just say ‘I love you’, it doesn’t mean anything. I don’t want to tell her, I want to show her. But I do want to tell everyone else. So I did.”

Commissioned in 2016 the bubblegum pink that covers all the original stairwell floors, walls, handrails and pipework resonates with iGen contemporary pop culture, symbolising the saturation of pink as an aesthetic trope for youth, wealth and even innocence online. The naivete of the colour also points to the infantilization of culture, materialising the logic of social media trends within an immersive and brutalist architecture.

Simon Whybray (b. 1984, Milton Keynes) lives and works in London. 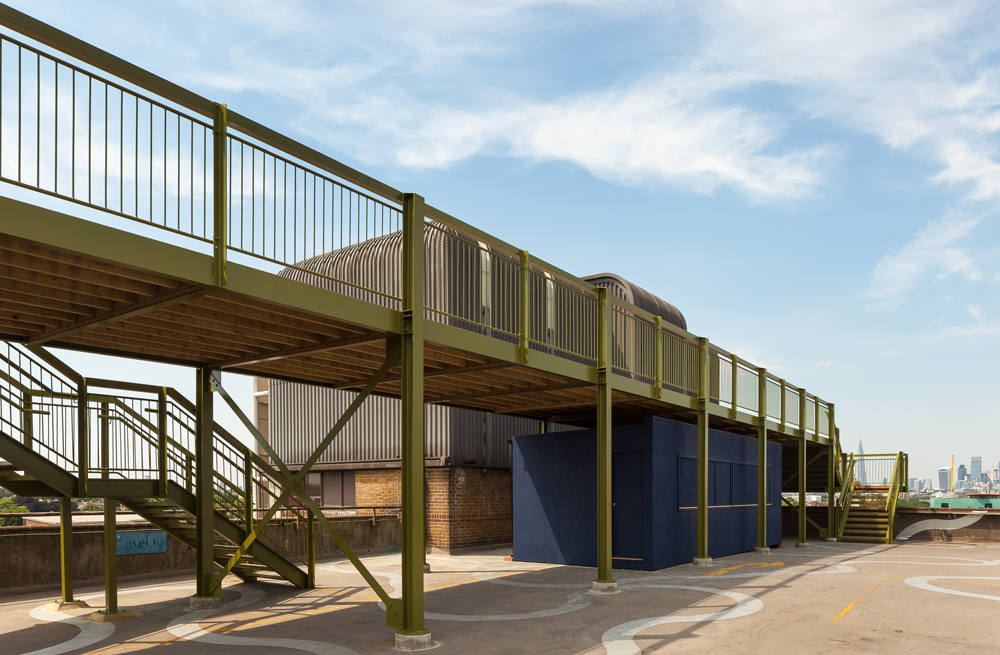 Built in 2017 the Peckham Observatory provides new perspectives on our on-site commissions as well as breathtaking views across London. From the Observatory visitors can take in the works of art and activities taking place on the roof of the car park.

The 3.5m-wide raised platform spans the entire width of the car park, its steel support beams cantilevered at both ends. Two staircases at either side provide an elevated promenade and on the northern tip the balustrade drops away at the half-landing to provide views out and across London. Nestled underneath the steelwork is a timber-framed Information Kiosk painted dark blue.

The title of Adel Abdessemed’s sculpture, Bristow, commissioned in 2016, is taken from the signature work of the British cartoonist Frank Dickens (1931 – 2016), whose cartoon strip of the same title ran for 41 years in the Evening Standard.

Adel Abdessemed’s radical practice, which regularly invokes raw acts and swift, energetic drawings, produces pictures in sculpture, video and photographs. These works form a statement that hits you like a straight punch: pictures in action, not stories in pictures. His unique approach and the force of the work he makes brings the power of the image round to a matter of feeling and elevates it to a way into the world.

Adel Abdessemed (b. 1971, Algeria) lives and works in Paris. 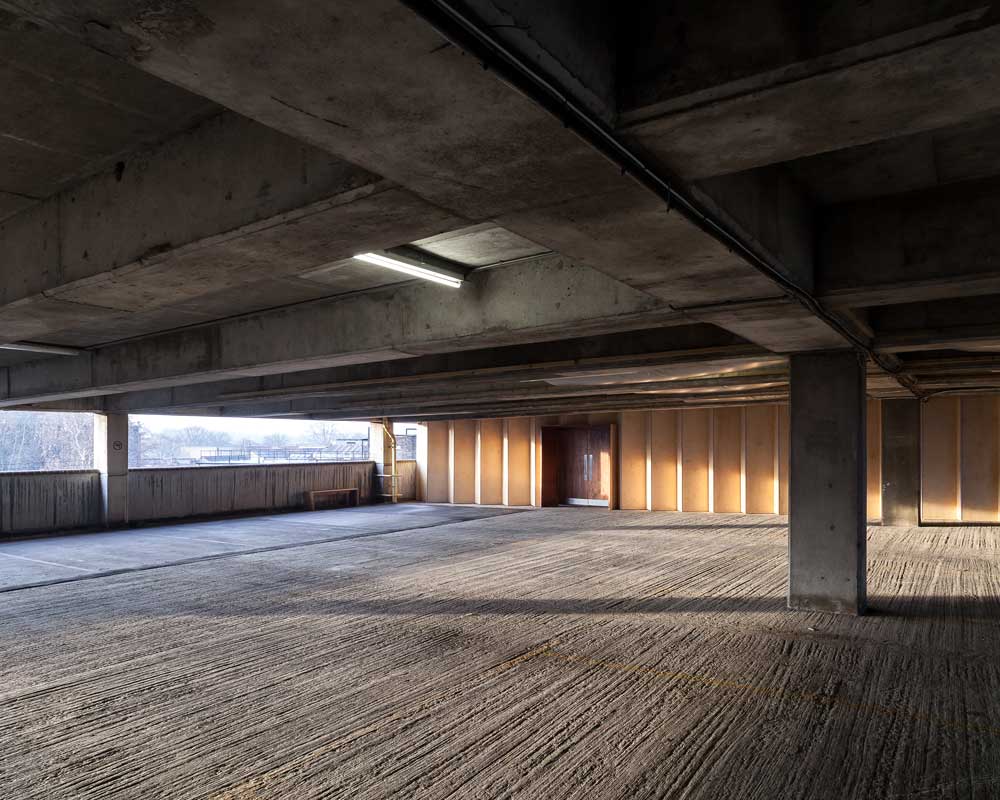 Completed between 2016 and 2017 this concertinaed plywood screen which provides an acoustic and visual backdrop for live music performances held in the covered spaces at Bold Tendencies. 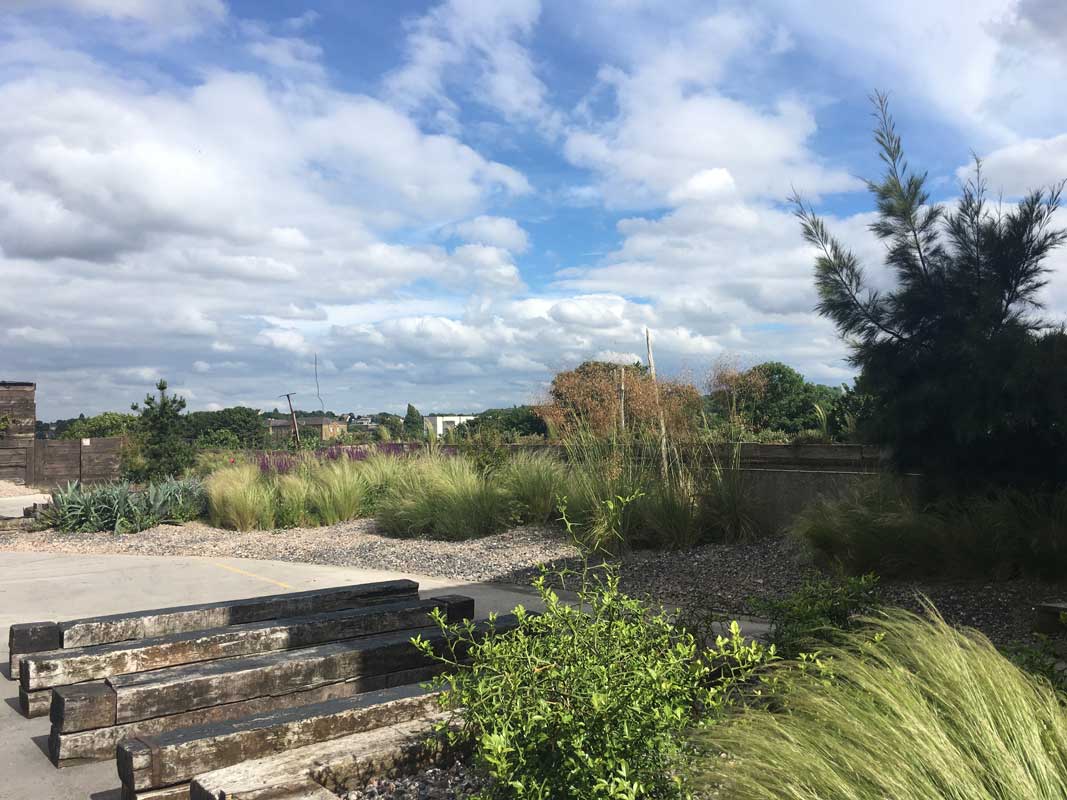 The Derek Jarman Garden was designed by Dan Bristow (Propagating Dan) in 2013. It is inspired by artist and film-maker Derek Jarman (1942-1994), who left behind an extraordinary legacy in the form of his garden at Dungeness in Kent, recognised as a spectacular artwork in itself.

Derek Jarman’s own garden is located in the wild, dynamic landscape of Dungeness with its expansive shingle beach, lighthouses and power stations; the Derek Jarman Garden here at Peckham honours its essence with the garden as an organic foil to an urban, at times hostile, environment in the way that the seascape influenced the design of the garden at Dungeness. The Derek Jarman Garden at Bold Tendencies will always be in a shifting state, and through it we hope that Derek Jarman’s ideas continue to be explored and brought to new audiences.

The Derek Jarman Garden was commissioned by Bold Tendencies as part of the artistic programme curated by Joe Balfour with Greta Hewison in 2013, welcoming the original Dungeness garden’s colour and magic to the site to flourish against the harsh climate of the car park. The Garden here was imagined by Keith Collins (1966-2018) long-time companion of Derek Jarman and keeper of the Dungeness legacy, with the critical guidance and support of David Gothard. 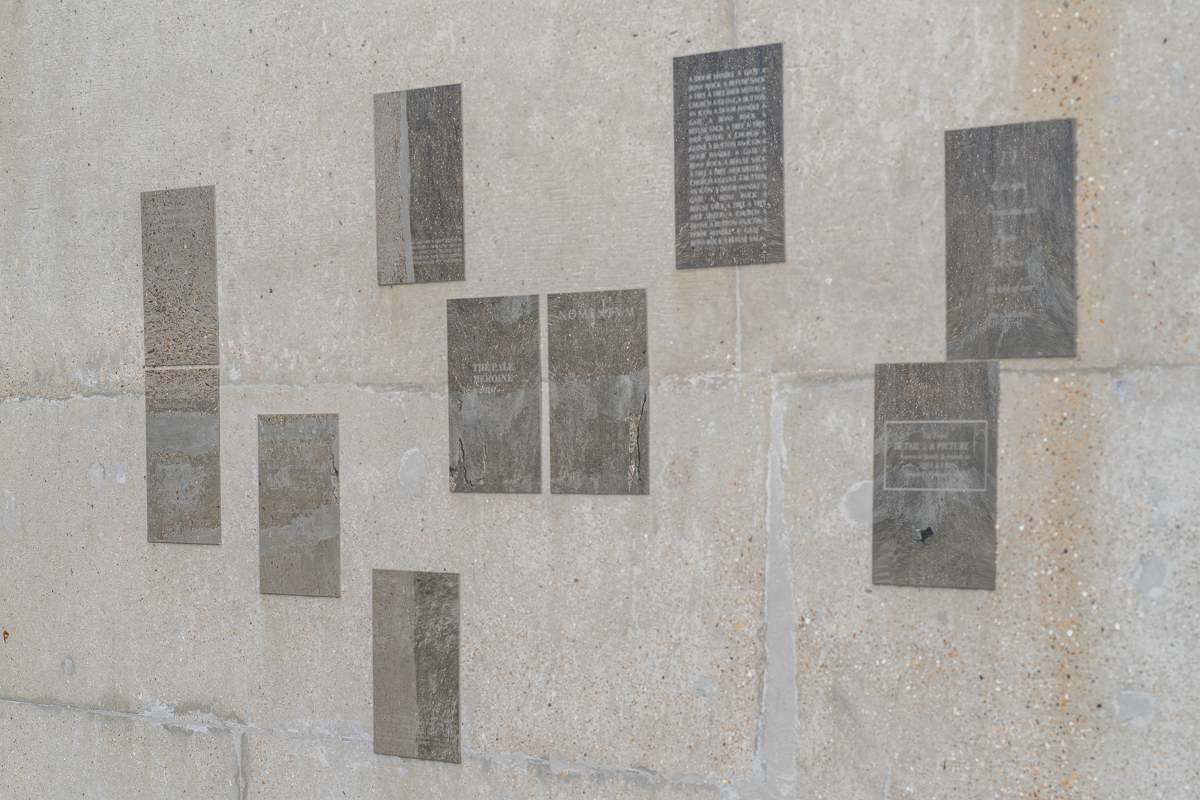 Commissioned in 2016 FLOURISHED brings together the combined practice of two young poets. Sophie Collins’ work is transfigurative and transformative, playing on translation methods and processual techniques to create poems that by turns reference history, structures and emotions. Sam Riviere’s poems work with the historical idea of the lyric; tormented, stunted, rooted and aware of difficult histories that surround how poems address us. FLOURISHED brings together imagined memorials from a poet’s workings. Cryptic and scattered, imagined and real, these indelible fragments of poems show the cycle of what it means to be remembered by their permanent presence here on site.

Sophie Collins and Sam Riviere live and work in Edinburgh.

Responding to the overload of visual media dominating our contemporary senses, Siân Lyn Hutchings developed this sonic library for the site, recording site’s ongoing and evolving aural history. The Dominant Eye (2018) is an evolving holding of field recordings made by visitors, members of staff and guests, archiving the wide variety of sounds that can be recorded on site, from orchestral music to dramatic readings of wall text, spoken diary entries to improvised poetry. These sounds are recorded on tape, indexed and installed on-site.

Siân Lyn Hutchings (b. 1994) lives and works in Newcastle. 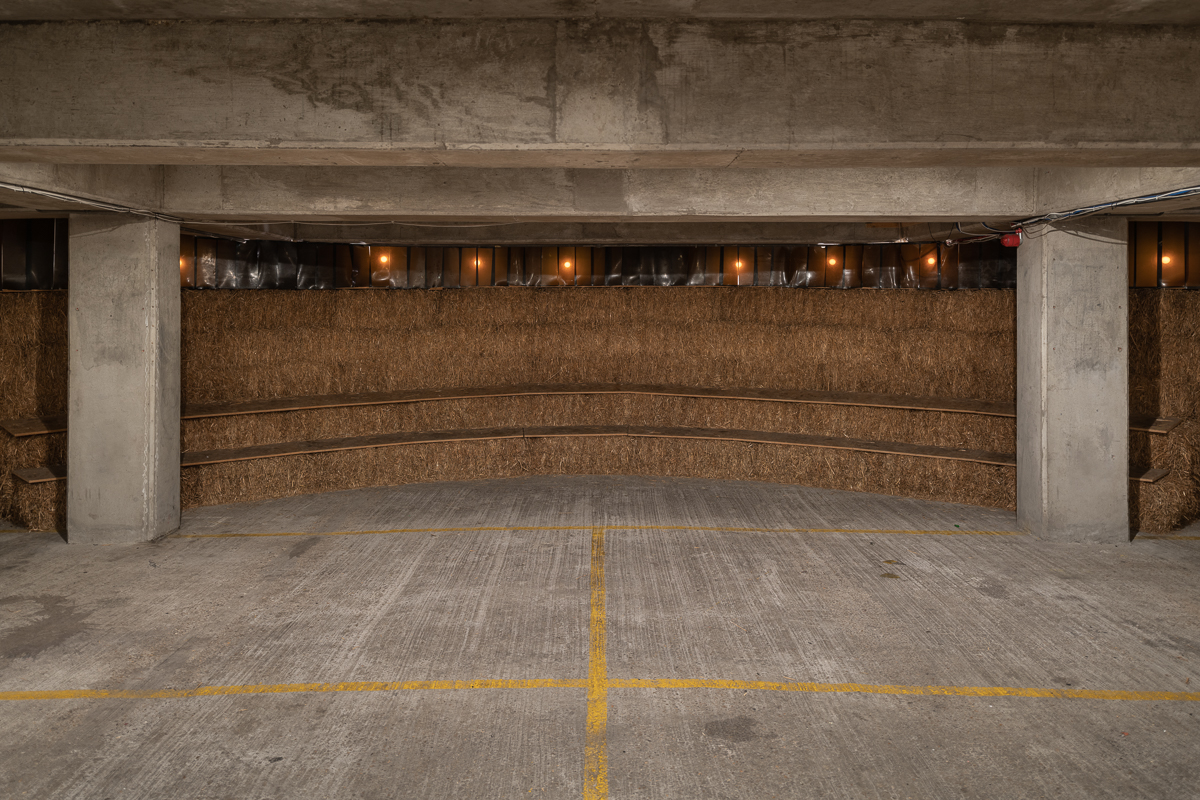 Practice Architecture designed and built the Straw Auditorium in 2010. 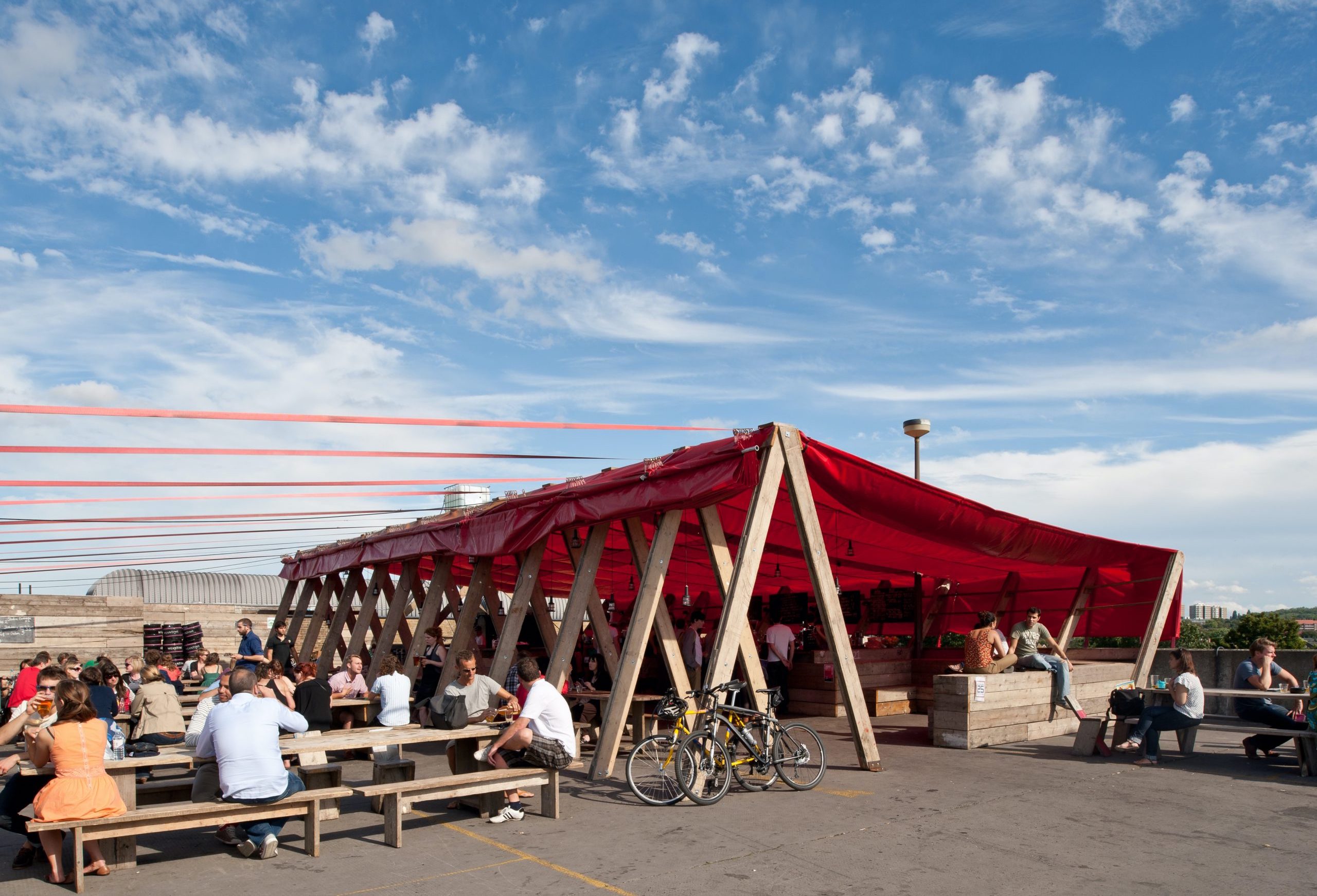 Frank’s Cafe was the first permanent architecture project at Bold Tendencies. It was designed by Practice Architecture (Lettice Drake & Paloma Gormley) and opened in 2009 by bartender Frank Boxer and chef Michael Davies.