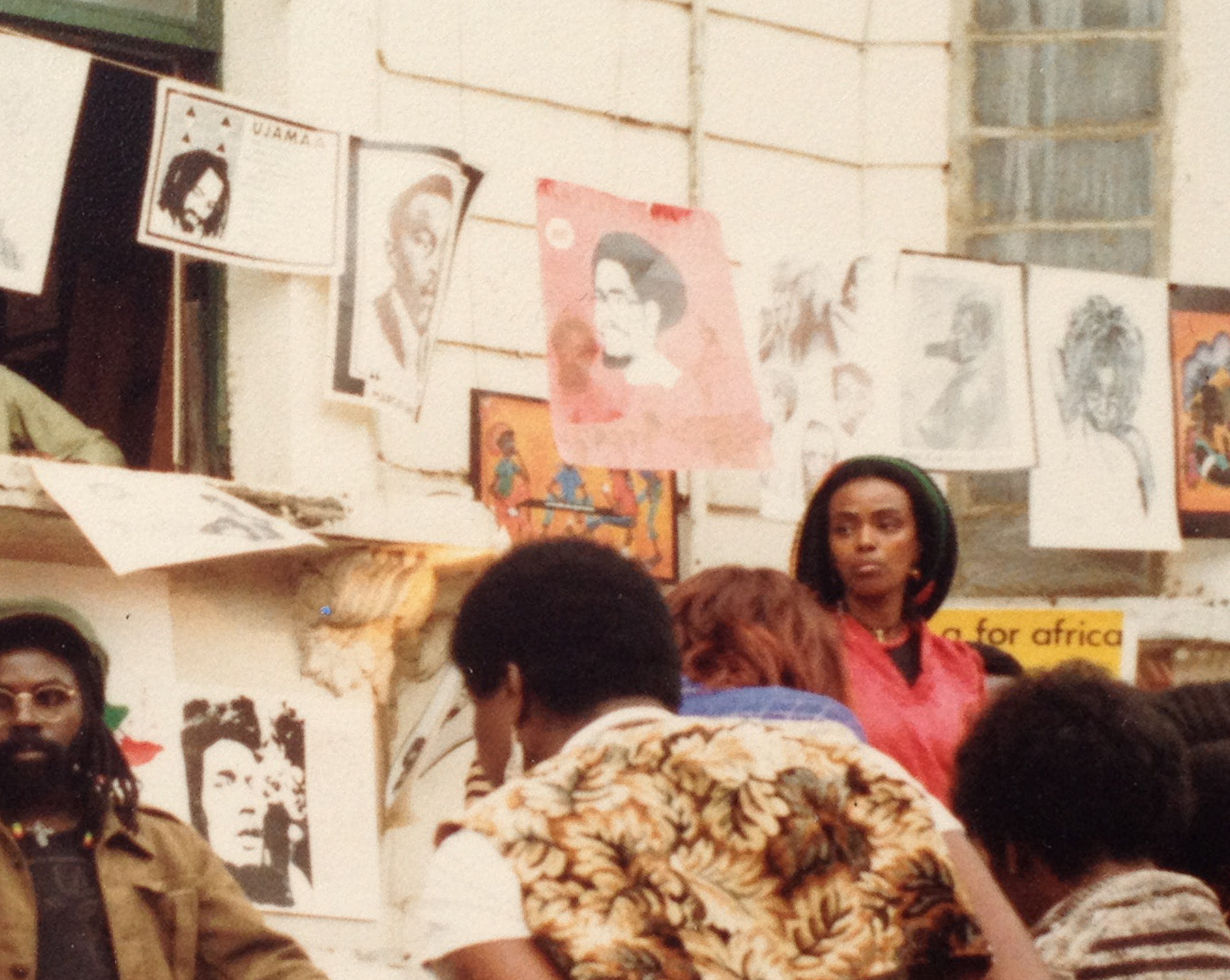 To mark its first anniversary, Eating At the Same Table are hosting a Gathering in the Bold Tendencies Straw Auditorium. The Gathering brings together artists of colour working in a variety of media and contexts as well as allies who nurture and recognise the value of black art production.

This first Gathering will make time to discuss, explore and remould the concept of Art Institutions through the lens of different social imaginaries, in the process creating a new Phantasy Art School. Whilst foregrounding visual art production, this Phantasy Art School will be an intergenerational and interdisciplinary environment.

Eating at the Same Table welcomes academics from across the Black Atlantic that bring insightful, anthropological, political and literary approaches to the issues we wish to explore, fostering new and stimulating avenues for exploration. The day will be underpinned by the core ethos of Eating At the Same Table, rooted in commensality. The presence of food and drink will facilitate, enable and ease the flow and movement of discussion and dialogue.

Eating At the Same Table is a peer-led initiative working to offer grassroots support and guidance for young creatives as they navigate the art world and creative industries. The Eating At the Same Table programme is shaped and contoured by the individual needs of its participating artists and is devoted to the expansion of this programme, welcoming new members from minority ethnic students and recent graduates of all UK art schools.

​About Delia Jarrett – Macauley
A multi-disciplinary scholar in history, literature and cultural politics, Delia is currently a fellow in English at the University of Warwick. Delia began her university teaching career in 1989 by running the first black women’s studies courses on the MA in Women’s Studies at the University of Kent; she later published an anthology based on that programme of work. She also devised and led the Arts Management Programme at Birkbeck College, London. Delia has trained teachers at Goldsmiths College. Delia has also contributed to a number of academic publications as author and board member including Feminist Review, Women’s History Review, Journal of Gender Studies and Gender and History.

>Session 2 – 12.30pm – ‘Culture, Heritage and Art’ with Nicole Crentsil
Nicole Crentsil Curator and co-founder of Black Girl Festival will be leading a talk exploring how culture, heritage and art are currently intersecting and reshaping what we understand as cultural spaces. Talk will be followed by a 15 minute Q&A.

About Nicole Crentsil
Nicole Crentsil is a London-based Ghanaian born curator, cultural researcher, public speaker and programmer. Having graduated with a BA in Product Design with a passion for art & design, Nicole balances working as a freelance cultural ethnographer alongside her passion for supporting young people and working with local community groups. In 2015, Nicole founded Unmasked Women, a platform discussing Black British women’ mental health. Since her successful exhibition, Nicole has curated an exhibition at the V&A, spoke and hosted TEDxUCLWomen and also curated a panel discussion at Tate Britain. In 2017, Nicole co-founded The Black Girl Festival – the UK’s first festival celebrating Black British women. Nicole’s main interests include working on collaborative community based projects, art, design and creating platforms for new emerging groups and artists. Nicole is keen to continue working with local community groups, schools, universities and local councils to bring her creative ideas to fruition.

>Session 3 – 14.00 – Taking Stock with WOCI Reading Group
The WOCI Reading Group will share a selection of material from their personal archives and experiences. This session will map the individual journeys of members of the group in creating and engaging with politicised and anti racist artworks as a prompt for wider discussion with those present.

>Session 4 – 15.15 – ‘Rethinking Aesthetics’ with Thick/er Black Lines
Art is many things; the expression or application of human creative skill, practice and imagination, an area of academic study, something to be appreciated primarily for its beauty or emotional power. What ‘Art’ is not however is objective and operating outside of the world as we know it. In this informal session as Thick/er Black Lines invite you to ‘Be Your Own Art School’ and explore through Black modernist film and the works of Jamaican scholar Sylvia Wynter, the emancipatory power – and necessarily limits – of Art as means to imagine and create ‘other worlds’.

About Thick/er Black Lines​
Thick/er Black Lines is an interdisciplinary research-led artist collective initiated by Rianna Jade Parker, Aurella Yussuf, Hudda Khaireh and Kariima Ali applying contemporary art theory, cultural studies and social practices to rewrite histories and to negotiate a way forward. Using print and design their intention is to artistically and intellectually testify to the Black European diaspora. Building upon an outdated framing of Black British art as new needs, professions and technologies emerge. Their work has been previously shown at Tate Exchange, (un)common space at Tate Britain and Project Row Houses, Texas, Round 46 alongside interventions by Black Women Artists for Black Lives Matter.

>Session 5 – 16.15 – ‘After Catastrophe’ with Professor Richard Drayton
In ‘After Catastrophe: Intellectuals, Poets, Novelists, Artists, and the challenge of independence in the Caribbean, 1960-1984’, Drayton takes us through the activities three successive generations of artists and intellectuals in and of the Caribbean in the 60’s 70’s and 80’s who sought to create a new aesthetic generated from sovereignty of the spirit rather than geography.  Drawing on George Lamming’s assertion that the Caribbean colonial experience was not a physical cruelty… rather ‘a terror of the mind, a daily exercise in self-mutilation’ Drayton explores how they created art out of personal experience and considers the contemporary challenges for creative emancipation.

About Professor Richard Drayton
Professor Richard Drayton was born in Guyana and grew up in Barbados, where he went to school at Harrison College. He left the Caribbean as a Barbados Scholar to Harvard University, going then to Yale, where he wrote his doctoral dissertation under the direction of Paul Kennedy and Frank Turner. He also spent two years as a graduate student at Balliol College, Oxford as the Commonwealth Caribbean Rhodes Scholar. In 1992 he first came to Cambridge as a Research Fellow of St Catharine’s College, moving back to Oxford in 1994 to be Darby Fellow and Tutor in Modern History at Lincoln College. After 1998, he was Associate Professor of British History at the University of Virginia. In 2001, he returned to Cambridge as University Lecturer in Imperial and extra-European History since 1500, and as Fellow and Director of Studies in History at Corpus Christi College. In 2002 he was awarded the Philip Leverhulme Prize for History. He was Visiting Professor of History at Harvard University in Spring 2009. He came to King’s as Rhodes Professor in 2009.

>Session 6 – 17.30 – ‘Now Let Us Shift…’ with Amrita Dhallu, Evan Ifekoya and Teresa Cisneros
Lead by independent curator Amrita Dhallu with artist Evan Ifekoya and cultural producer Teresa Cisneros. As emerging artists of colour are beginning to re-centre identity politics within their practices, it is becoming ever more imperative for them to develop their own support structures. In this roundtable, we will draw from the experiences of the participants who will discuss their personal strategies of care, healing and wellbeing that occur within their creative practices. We will discover how this approach can remedy the institutionally-imposed ruptures that impede our true creative potential, acting as a catalyst for both personal and social transformation.

About Amrita Dhallu
Amrita Dhallu is a curator working across London and Birmingham. She currently holds the post of Curatorial Assistant: Commissions at Chisenhale Gallery, London. Her work focuses on providing support structures for emerging British artists of Black and Asian descent, through commissioning, creating networks and establishing intergenerational learning spaces. Her current research looks at radically positioning care and wellbeing within formal arts education in order for artists to re-think ways of professional development.

About Teresa Cisneros
Teresa Cisneros is the Director and Co-founder of b.Dewitt Gallery has dedicated her career to nurturing the practices of artists both in the U.S. and UK for over 15 years. Having supported artists for over a decade with institutions such as The Showroom and Iniva, she is dedicated to using art, history, and politics as a way to explore contemporary living.

>Session 7 – 18.30 – Drawing Workshop with Beverley Bennett
Join artist-filmmaker Beverley Bennett for an ink based drawing workshop where she will be going through various drawing methodologies in creating graphic scores. The session will begin with short conversation between Beverley and the artist educator Shepherd Manyika who shares the central concerns of her practice.

About Shepherd Manyinka
Shepherd Manyinka is an Artist/educator who has worked with a range of prestigious Arts Education institutions across the UK including the South London Gallery, Tate, Central Saint Martins, Whitechapel Peckham Platform, Camden Arts Centre and Milton Keynes Arts Centre.

>Session 8 – ‘FREE FOR ALL’ – Closing Party with Black in The Day, Eldon, CKTRL and Errol (Touching Bass)
Black in The Day will join us during our closing party to run a very special scanning session for Phantasy Art School. Members of the diaspora are invited to submit any archival family portraits or personal photographs. The photographs will be scanned, given a written caption by the owner and returned to take back home. They will be added to Black in The Day’s ever-growing archive. Join us for this live-archiving session, bring your own photographs and have your very own portrait taken! Dance / vibe / celebrate with us with sounds provided by Eldon, CKTRL & Errol (Touching Bass)

About Black in The Day
Black in The Day, founded by Tania Nwachukwu and Jojo Sonubi, is a submission-based archive documenting the lives and experiences of black people in the UK. Tania Nwachukwu is a Nigerian-British writer, poet and performer from London. She is a member of the Octavia poetry collective for women of colour and a Barbican Young Poets alumna. Jojo Sonubi runs an event brand called RECESS, renowned for their day parties and club nights as well as the RECESS Soundclash. They also have just launched a weekly radio show strictly for music lovers. Jojo is primarily a graphic designer and is the creative director for both these projects.

About Eating At the Same Table
Eating At the Same Table is a new collective of young emerging artists of colour. Founded in September 2017 by Bold Tendencies’ Director of Education, Sasha Morgan and multidisciplinary artist Rochelle White, the collective is supported by Bold Tendencies as they work to offer the grass roots support & guidance creatives need as they navigate an art world that can often seem all too intimidating to the uninitiated. This peer-led group is a positive manifestation of the frustration caused by the lack of diversity within mainstream arts institutions, who have long failed to welcome, accommodate or encourage emerging artists of colour. This is a network in which a bespoke set of personal and professional relationships can flourish between the emerging and the established. Their programme is tailored to facilitate the individual needs of its artists. Eating At the Same Table are devoted to the expansion of this programme and welcome applications from minority ethnic students from all UK art schools.

Step free access is available via the lifts from the ground floor. Upon arriving at our main entrance, to the right of Peckhamplex Cinema, make yourself known to the member of security on the door who will arrange access for you.