Since 2007 the rooftop spaces at Peckham Multi-Storey Car Park have been home to not-for-profit organisation Bold Tendencies which is unique in terms of the rich mix of what it does, and where and how it does it.

Bold Tendencies supports artists to develop their ideas and to realise site-specific projects. We commission new visual art — 114 works have been shown here to date — and produce a live programme of music, dance and opera.

Bold Tendencies has also commissioned new architecture for the site — Frank’s Cafe in 2009, the Straw Auditorium in 2010, and the Peckham Observatory in 2017.

Bold Tendencies is for everyone. We have welcomed more than 2 million people in 13 summer seasons since 2007. We animate the programme and the site for the neighbourhood through standalone education and community initiatives that take culture and civic values seriously.

Bold Tendencies celebrates the free enjoyment of public space in the city, participation in a rich, experimental programme and open access to this special, spectacular place. 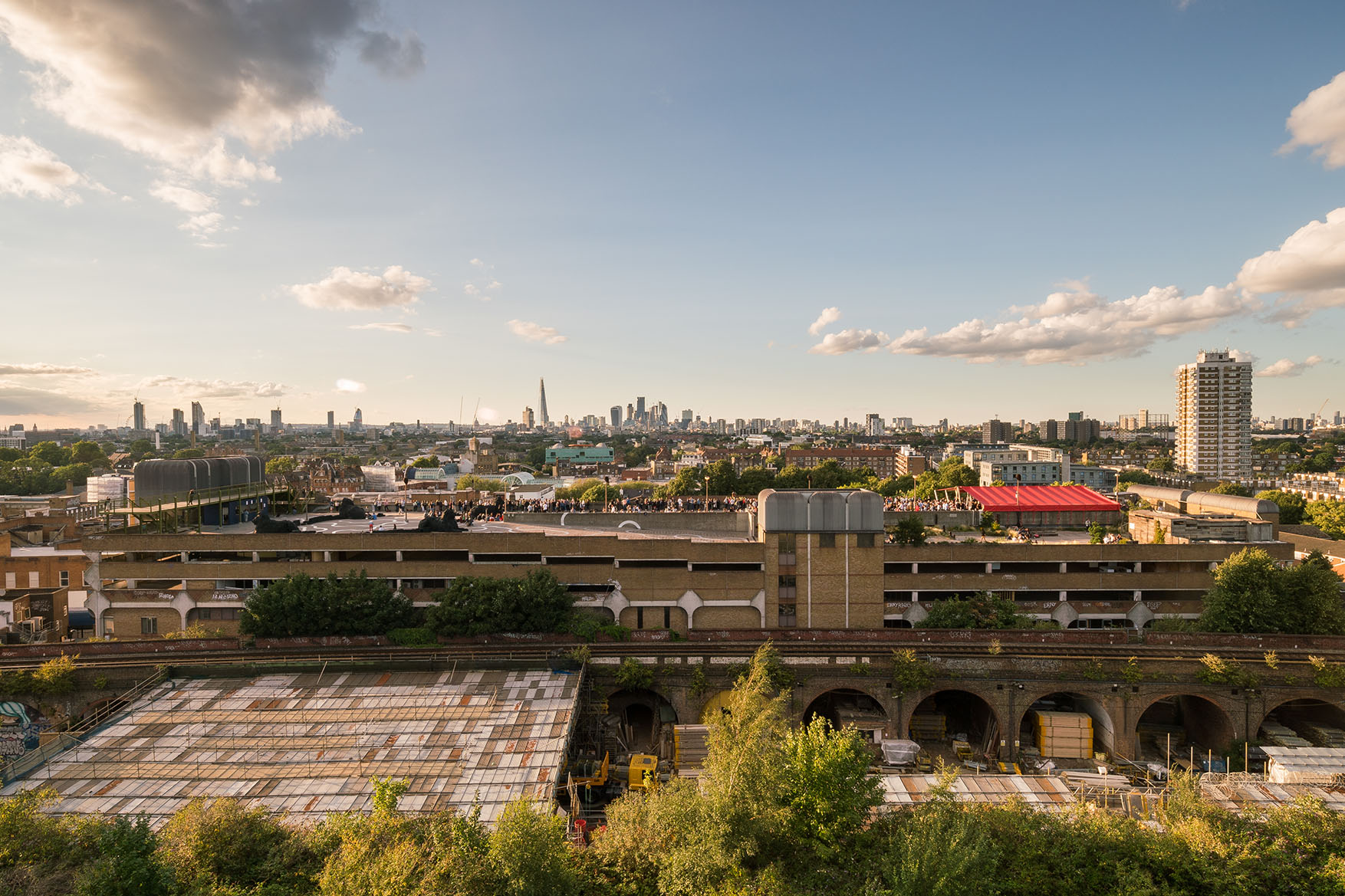 Peckham Multi-Storey car park was commissioned in 1980 by Sainsbury’s Supermarkets. Designed and eventually built in 1982 by their in-house Architect and Engineers Department, the 700-space car park stood with exposed concrete frame and brick cladding, very much the style of its day. The car park was built to service as a brand new style of self-service supermarket, replacing the traditional counter-store branch that had operated on Rye Lane since 1931 (now Clark’s Shoe Shop).

In November 1982 the Sainsbury’s counter shop closed, the last ever counter service. On the last day of the same month, its replacement supermarket opened its doors to the public. With a sales area of 17,094 sq ft, it was eight times the size of the old store.

After 10 years Sainsbury’s moved in 1992 to its present location on Dog Kennel Hill. Two years later in 1994 the Rye Lane site was transformed into a cinema – Peckhamplex – which has occupied the space of the former Peckham supermarket ever since. From then on, the adjoining car park infrastructure was underused, eventually disused,  and the top four floors were closed from public access.

Bold Tendencies was started in 2007 with the support and encouragement of Russell Profitt and David Strevens at Southwark Council. The top floors of the car park were reopened to the public as a sculpture exhibition and Bold Tendencies was established as a not-for-profit organisation. It has since developed an annual summer season of site-specific art, new architecture and live events.

In 2017, Bold Tendencies reached an agreement with Southwark Council for a new long-term lease. The car park was taken off the local area redevelopment plan, solidifying the cultural status of the building for years to come and guaranteeing Bold Tendencies a secure future in its home in these unique spaces.

Hannah Barry studied History of Art at the University of Cambridge and started her work in Peckham in 2006. She founded Bold Tendencies as a not for profit project in 2007. She is on the Board of Artangel and on the Serpentine Contemporary Council. She sat on the Mayor of London’s Night Time Commission (2017-18) and was Founding Co-Chair of the Chinati Contemporary Council in Marfa, Texas (2013).

Diana Cordoba Barrios grew up in Mexico and studied Fine Arts at the Universidad de las Americas Puebla, Mexico. She co-founded seisporseis, a gallery space in Cholula, Mexico. From 2006 she worked at the Peggy Guggenheim Collection in Venice where she became an Intern Coordinator, running the prestigious Guggenheim Internship Programme. She was selected by the Solomon R. Guggenheim Foundation to run the USA Pavilion for the 53rd Art Venice Biennale, Bruce Nauman: Topological Gardens and for the 54th Art Venice Biennale Allora & Calzadilla: Gloria. She designed and delivered educational programmes with the USA Pavilion partner museums with the Indianapolis Museum of Art and the Ponce Museum, Puerto Rico, she ran the Teen Global Exchange Programme (2011) and with the Bronx Museum of Art she ran the Teen Exchange Venice Bronx (2013).  She is fluent in Spanish, Italian and English.

A graduate of Royal Academy of Music specialising in performance (cello), Tom has always had a passion for live events whether on stage or off. Tom began freelancing in 2010 as a Stage and Production Manager for a variety of concert halls and production companies in London, including Kings Place, Roundhouse and Spitalfields Music. This led to taking on the role of Orchestral Manager for The Multi-Story Orchestra in 2015 before joining the Bold Tendencies team as Site and Production Manager in 2016. In 2020 Tom brought the responsibility of Safeguarding Officer into his role.

Charlie Mills is a curator and writer based in South East London. Since 2017 he has worked as Artist Liaison for Bold Tendencies and Hannah Barry Gallery. His independent curation has included TRANSGENESIS (2021); A Land of Incomparable Beauty (2020); ABSINTHE §1 – §3 (2019 – 2020); Slap Dash for No Cash (2018); and The Unlimited Dream Company (2017 – 2018). Charlie writes exhibition texts and catalogue essays for a number of UK-based galleries and artists, and conducts regular artists interviews for a number of online publications. Charlie is a founding member of Collective Ending HQ, a collectively run gallery and studio complex in Deptford, South East London.

Donatienne Ferré grew up in Paris and studied at ESSEC Business School where she specialised in luxury men’s fashion. She has worked for French fashion houses such as Lanvin and Berluti. In 2016, she moved to London to complete a Master of Arts in Fashion Cultures: Fashion and Film at the London College of Fashion. She directed a short fashion film Millennial Pink (2017) which was selected for the MA Final Show. Following her Master of Arts she joined Bold Tendencies’s Art Trainee Programme in 2018, to become the Art Trainee Coordinator in 2019 and Site Liaison since 2020.

Jerusha Morgan has worked for over a decade in health, wellbeing and creative education. With qualifications in fine art, psychology and a degree in Contemporary Education she has a light hearted, creative and intuitive approach to leading community work and youth outreach. After a five year stint with the Alzheimer’s Society she expanded into freelance work facilitating workshops in schools and delivering a range of community fitness and engagement projects. Currently Jerusha has a Visitor Services role and is coordinating the Art Trainee Programme at Bold Tendencies.

Jacob Hewes is a freelance Arts Producer, based in Colchester, Essex. He studied Biological Sciences at the University of East Anglia, and started his career as a Science Communicator working for local, national and international festival organisations. In 2018, he transitioned from sciences to the arts, and began working as Production & Programme Assistant for Norfolk & Norwich Festival. Currently, he works as an Assistant Producer for both Out There Arts, National Centre for Outdoor Arts and Circus, and live art collaboration Hunt & Darton. Jacob is a former Art Trainee (2020), and joins Bold Tendencies in the role of Digital Services.