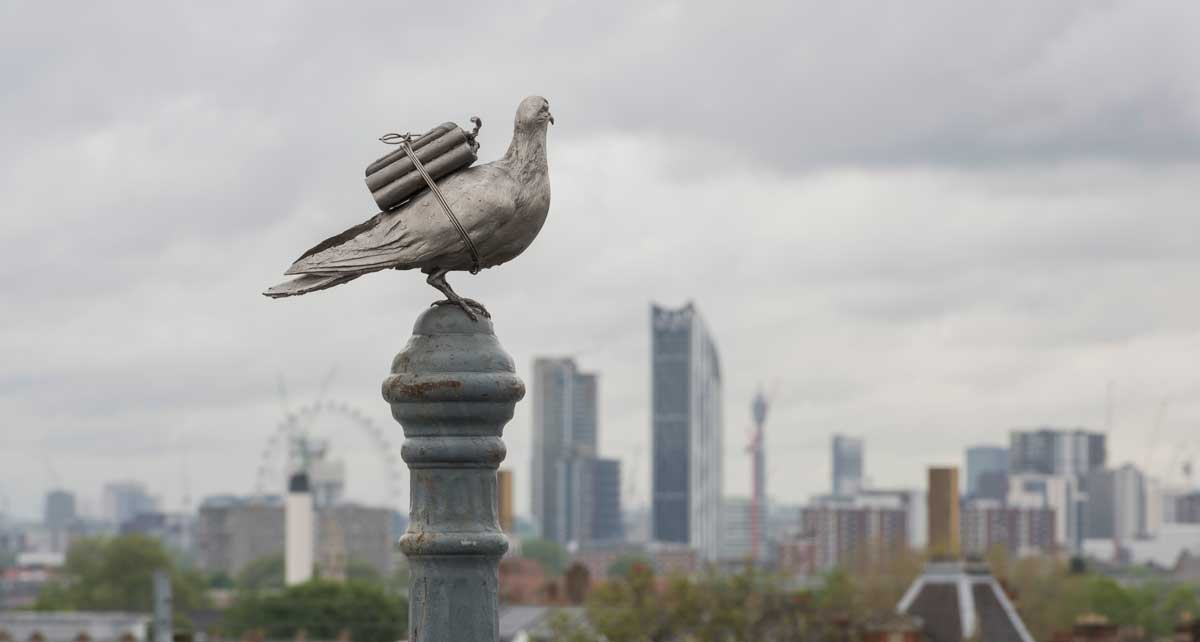 Adel Abdessemed’s specially commissioned work, conceived of and made for this site, is entitled Bristow. The title of the sculpture is taken from the signature work of the British cartoonist Frank Dickens (1931 – 2016), whose cartoon strip of the same name ran for 41 years in the Evening Standard. The series follows the life of a downtrodden and monotonous clerk as he avoids doing useful work for his large city conglomerate; in particular, he is distracted by a frequent pigeon on his windowsill — an everyday character synonymous with claustrophobic metropolitan centres.Combining this pedestrian creature with symbols of makeshift terrorism and instant messaging, Bristow captures a contemporary culture of fear mixed with the banality of everyday city life. Perched on a London bollard, it is a discreet reminder of the lack of faith we entrust in our neighbours, and the unsettling, suspicious ways in which this manifests throughout the world.

Adel Abdessemed studied at the École des Beaux-arts de Batna and Algiers (1987-1994), before travelling to France where he attended the École nationale des beaux-arts de Lyon (1994-1998). He was an artist-in-residence at the Cité internationale des Arts de Paris (1999-2000), then at P.S.1 Contemporary Art Center, New York. Besides Paris and New York, the artist has also lived and worked in Berlin.

In 2016, Abdessemed was the guest artist in Avignon Festival where was hold an exhibition/conversation Surfaces. This same year, the work Bristow was commissioned by Bold Tendencies for their Peckam site, London. In 2015, he participates to the 56th Venice Biennale, All The World’s Futures (also in 2007 and 2003), and to Picasso.mania, at the Grand Palais, Paris. His 2015 solo shows count From Here to Eternity at the gallery Venus Over Los Angeles, Jalousies, complicités avec Jean Nouvel, in Vence; and Palace, at CAC Malaga.

In 2012, his work was the subject of a major solo exhibition at Centre Georges Pompidou in Paris, Adel Abdessemed Je suis innocent, accompanied by a fully illustrated catalogue published by the museum and Steidl, and the same year at David Zwirner, New York, Adel Abdessemed: Who’s Afraid of the Big Bad Wolf?

In 2017 Abdessemed will be part of the Oku-Noto Triennale in Suzu, Japan, and in Lujiazui, Shanghai, and a major solo show will be held at the Musée des beaux-arts in Montréal. 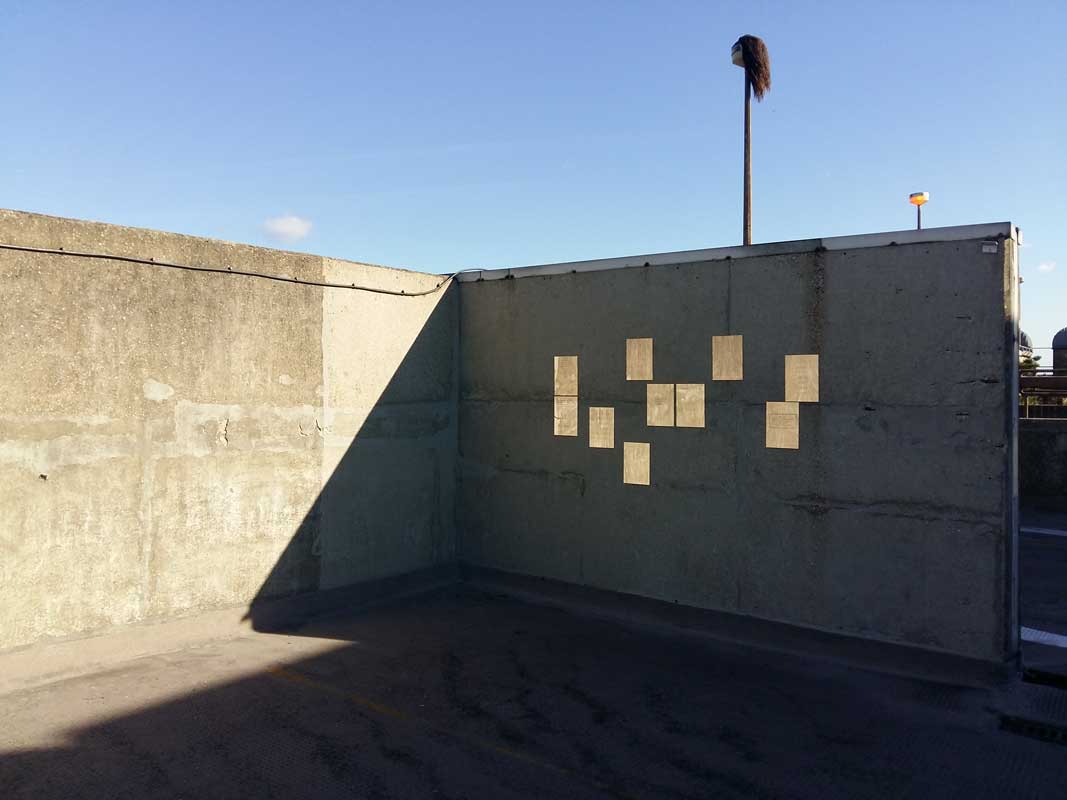 FLOURISHED brings together the combined practice of two poets. Sophie Collins’ work is transfigurative and transformative, playing on translation methods and processual techniques to create poems that by turn reference history, structures and emotions. Sam Riviere’s poems work with the historical idea of the lyric: tormented, stunted, rooted and aware of difficult histories that surround how poems address us.

Their first collaborative work, FLOURISHED is made up of 10 engraved mirrored panels mounted as a fractured mosaic on the car park wall. Together these panels imagine a sequence of memorials from a poet’s workings. Cryptic and scattered, imagined and real, by their permanent presence here on-site these indelible fragments of poems show the cycle of what it means to be remembered, and what is lost.

ABOUT SOPHIE COLLINS AND SAM RIVIERE

Sophie Collins grew up in Bergen, North Holland, and now lives in Edinburgh. She is co-editor of tender, an online arts quarterly, and editor of Currently & Emotion (Test Centre, 2016), an anthology of contemporary poetry translations. small white monkeys, a text on self-expression, self-help and shame, was published by Book Works in November 2017 as part of a commissioned residency at Glasgow Women’s Library.

Sam Riviere is the author of the poetry books 81 Austerities (Faber, 2012) and Kim Kardashian’s Marriage (Faber, 2015). Limited-edition publications include Standard Twin Fantasy (Egg Box, 2014) and True Colours(After Hours, 2016). Safe Mode (Test Centre, 2017), an ‘ambient novel’, is his first work of fiction. He lives in Edinburgh and runs the micropublisher If a Leaf Falls Press. 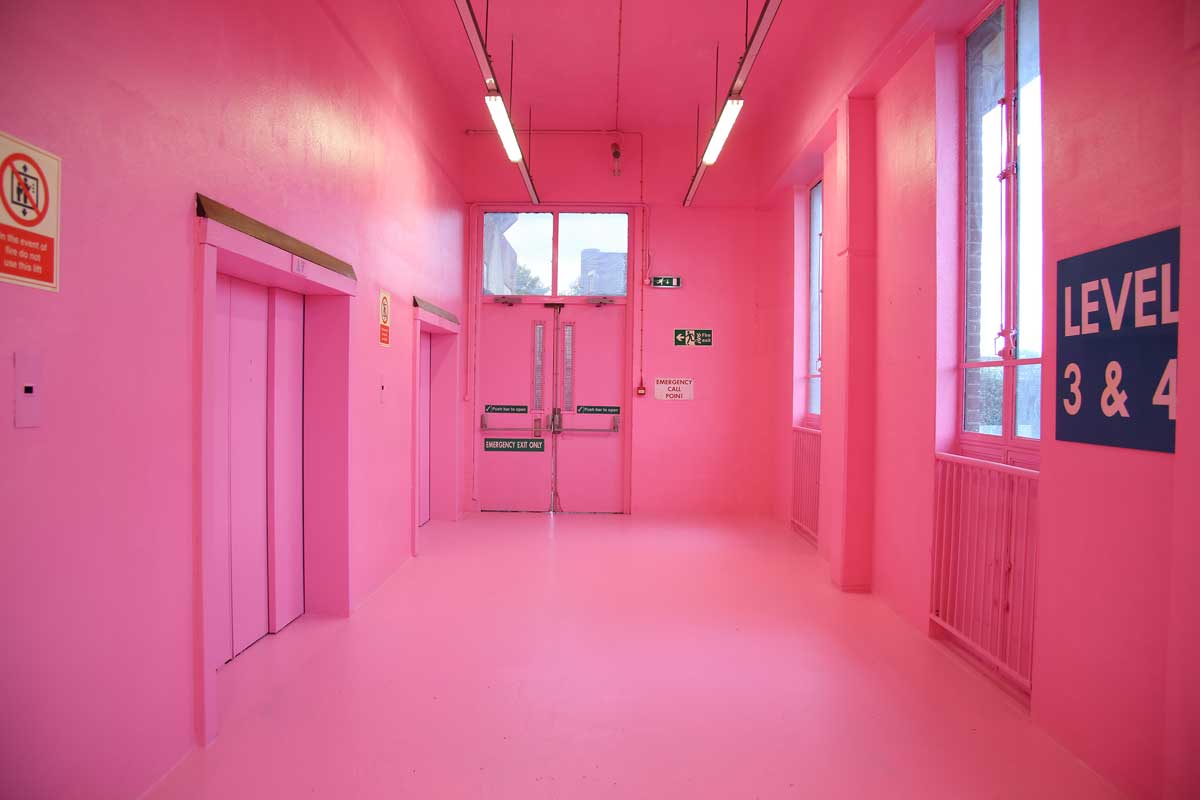 HI BOO I LOVE YOU

First conceived by the artist as a love letter, this staircase represents the heartfelt anxieties of love and the enormity of trying to express this feeling: “I can’t just say ‘I love you’, it doesn’t mean anything. I don’t want to tell them, I want to show them.” The bubblegum pink that covers this stairwell resonates with contemporary pop culture and the saturation of pink as an aesthetic trope for youth, wealth and innocence online. The work points to the infantilization of culture found in corporate marketing and the commodification of our nostalgia for adolescence. Materialising the logic of social media trends within a brutalist architecture, hi boo i love you nevertheless celebrates a candid and vulnerable experience of emotion that transcends the artificiality of the screen. Simon Whybray (b. 1984, Milton Keynes) lives and works in London.