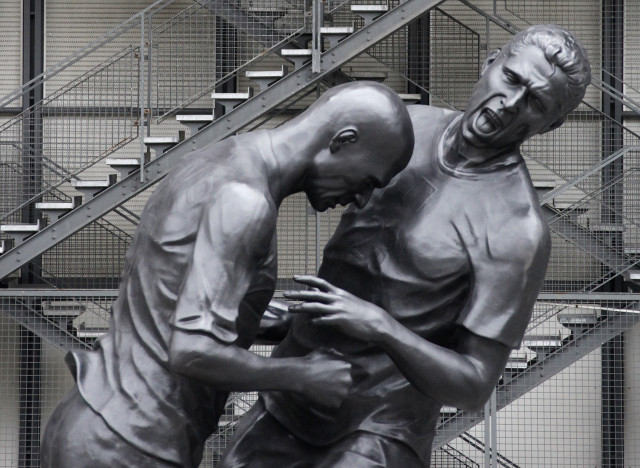 From Zidane’s infamous headbutt in 2006 to Jeff Koons’ BMW Art Car in Le Mans, from Didi-Huberman’s fireflies to live streams and thunderstorms in Corsica, Jean-Philippe Toussaint’s latest book Football is about more than stadia and international players – it is a journey and a pastime, a link to childhood and to the art of writing, a world of headbutts, melancholy and passion. Zidane’s headbutt on Marco Materazzi was also immortalised in Coup de tête by artist Adel Abdessemed, a large-scale sculpture made on the occasion of the artist’s Centre Georges Pompidou retrospective in 2012. Toussaint and Abdessemed, whose in situ work Bristow is the 2016 Bold Tendencies commission, are collaborating on a project for the 2016 Avignon theatre festival. They will be joined by the New York Times writer Farah Nayeri in a conversation about contemporary art, writing and football, moderated by Dr. Donatien Grau. The event will include screenings of Jean-Philippe Toussaint’s Brief History of Football, a series of four three-minute films commissioned by Arte for Euro 2012, and a screening of a video work by Abdessemed.

Farah Nayeri is a culture writer based in London. She writes for the New York Times. Formerly Bloomberg’s culture correspondent, she covers mainly visual arts and architecture.

Jean-Philippe Toussaint is the author of nine novels, all published by Éditions de Minuit in France, and the winner of numerous literary prizes, including the Prix Médicis for Running Away and the Prix Décembre for The Truth about Marie.

Fitzcarraldo Editions is an independent publisher specialising in contemporary fiction and long-form essays. Founded in 2014, it focuses on ambitious, imaginative and innovative writing, both in translation and in the English language. Each book, designed by Ray O’Meara of the Office of Optimism, is published as a paperback original with French flaps, using a custom serif typeface (called Fitzcarraldo).