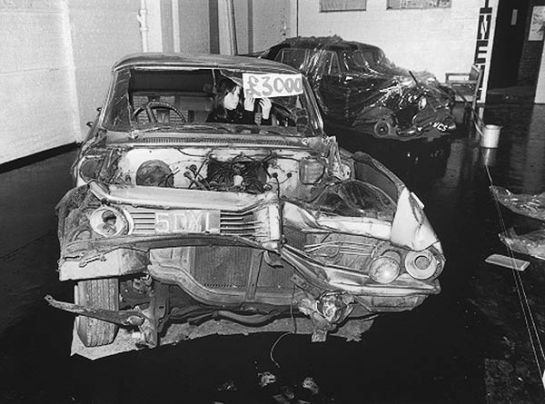 ‘Driving a car is an analogue experience: forward motion achieved by contained
explosions and controlled by nervous manual inputs. And a car crash is the ultimate
analogue experience. In our soulless, virtual, digital age the car crash achieves a
sort of historic poignancy.’

– Stephen Bayley, extract from Death Drive: There are no Accidents

Stephen Bayley’s Death Drive (Circa Press) is a cultural history of the car crash.
Released in March, it has been among the most talked-about books of the year. Now
it provides the context for an extraordinary event.

In 1973 JG Ballard’s infamous novel, Crash, was unleashed on audiences who were
both scandalised and titillated by its content. With its jarring themes of tearing metal,
sex and death, it was quickly established as a cult classic. Prior to the book’s
release, Ballard explored his controversial subject matter in the exhibition, Crashed
Cars, which he staged at the New Arts Lab, in Camden Town, in April 1970.

Featuring three wrecked cars – a Pontiac, an Austin Cambridge A60 and a Mini – the
installation invited casual acts of vandalism: cars were clambered over, glass was
broken and paint daubed. At the opening, a naked woman served drinks and mingled
with the guests, whose reactions were captured on video and transmitted to CCTV
screens via a live feed.

In homage to Ballard’s creative genius and to celebrate the publication of Death
Drive, publisher Circa Press and Peckham art commissioning organisation Bold
Tendencies are collaborating to recreate Crashed Cars at Bold Tendencies’ car park
home on Levels 7-10 of the Peckham multi-storey in south-east London.

The opening event will feature a performance by celebrated burlesque artist Ms Tallulah Blue, evoking Ballard’s long-term muse, the striptease artist Euphoria Bliss. Frank’s Café will serve a special Death Drive cocktail – a brand new classic in the cocktail canon. And author Stephen Bayley will be on hand to sign copies of Death Drive.
On Wednesday 14 th September, Bold Tendencies Peckham Multi-Storey Car Park
will provide a backdrop for a screening of the David Cronenberg film ‘Crash’,
preceded by a talk from Stephen Bayley.