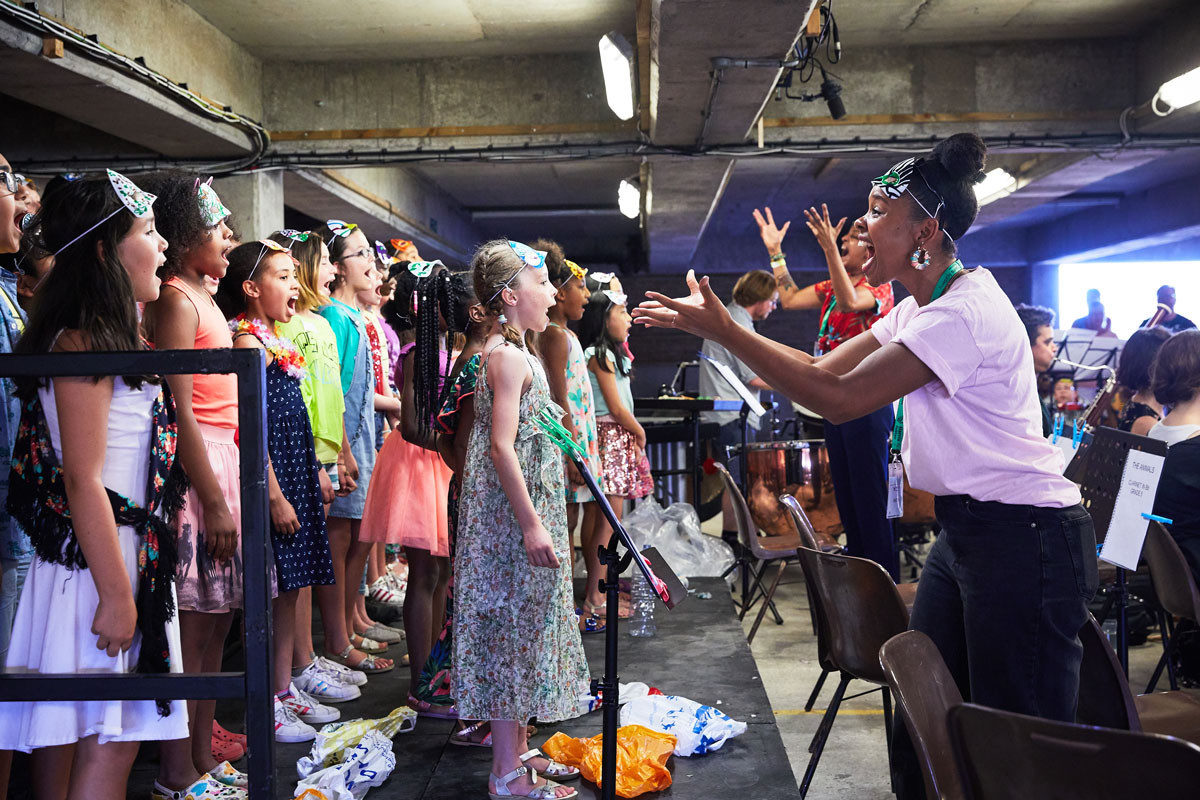 This concert will bring soprano Francesca Chiejina to Bold Tendencies to perform Dove sono i bei momenti from Mozart’s opera The Marriage of Figaro, alongside a new arrangement of Handel’s Passacaglia, Ravel’s Pavane pour une infante défunte, a new work by Kate Whitley for orchestra and children’s choir, The Caged Bird, and Ki Ki Ri Ku, a work specially made for the concert by The Multi-Story Youth Choir.

Wolfgang Amadeus Mozart is arguably the most prolific and influential Austrian composer of The Classical Era. His 1786 opera, The Marriage of Figaro, tells the story of two servants’ successful wedlock despite the frustrations of their employer. It is considered a cornerstone of Mozart’s operatic repertoire and a pinnacle of comic opera.

George Frederick Handel was a German composer, soon adopted by England as one of its most prominent baroque composers of the 18th century. This Passacaglia is featured in the last movement of Handel’s Harpsichord Suite in G minor (HMV 432).

Maurice Ravel was a French Impressionist composer, internationally regarded as France’s greatest living composer during the 1920s and 1930s. Ravel described Pavane pour une infante défunte as “an evocation of a pavane [a slow processional dance] that a little princess might, in former times, have danced at the Spanish court.”

Kate Whitley’s new piece, The Caged Bird, is the setting of a poem by Maya Angelou which tells of a trapped bird whose only liberation is singing. This is a world premiere brought to life by the Multi-Story Youth Choir. Composed to Lithiuanian folk music, Ki Ki Ri Ku is a new piece created by the Multi-Story Youth Choir led by Jude Carlton, Elsa Bradley, Linton Stephens and Fra Rustumji.

The Multi-Story Orchestra presents extraordinary performances in unexpected settings. Winners of a 2016 Royal Philharmonic Society award, the Orchestra has been celebrated as one of the most exciting ensembles to emerge in recent years and their 2016 BBC Proms debut performance was widely critically acclaimed: “joyous and expert music-making” ★★★★★ — THE TIMES. The Orchestra will be joined by young singers and instrumentalists from the Multi-Story Youth Choir and Ensemble, who first came together for their debut BBC Proms performance live on Radio 3 in 2017.

Suitable for all ages

Tickets: £10 / £5
You can choose to pay either £5 or £10 for your ticket.
All our tickets are heavily subsidised. If you would like to support us to continue our work in Peckham, please purchase a full price ticket, however we do not want finance to be a barrier to anyone.