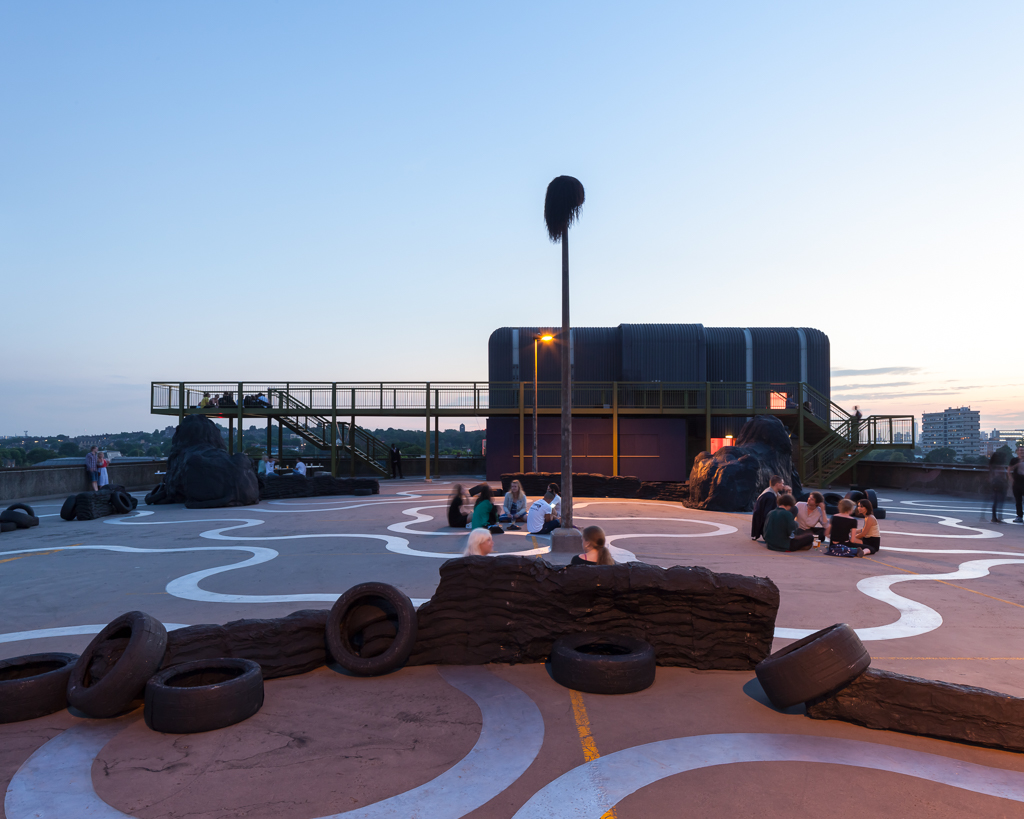 Ewa Axelrad, Let’s go. Yes, let’s go. (They do not move)
Isaac Olvera, Your image will be weathered but never taken away 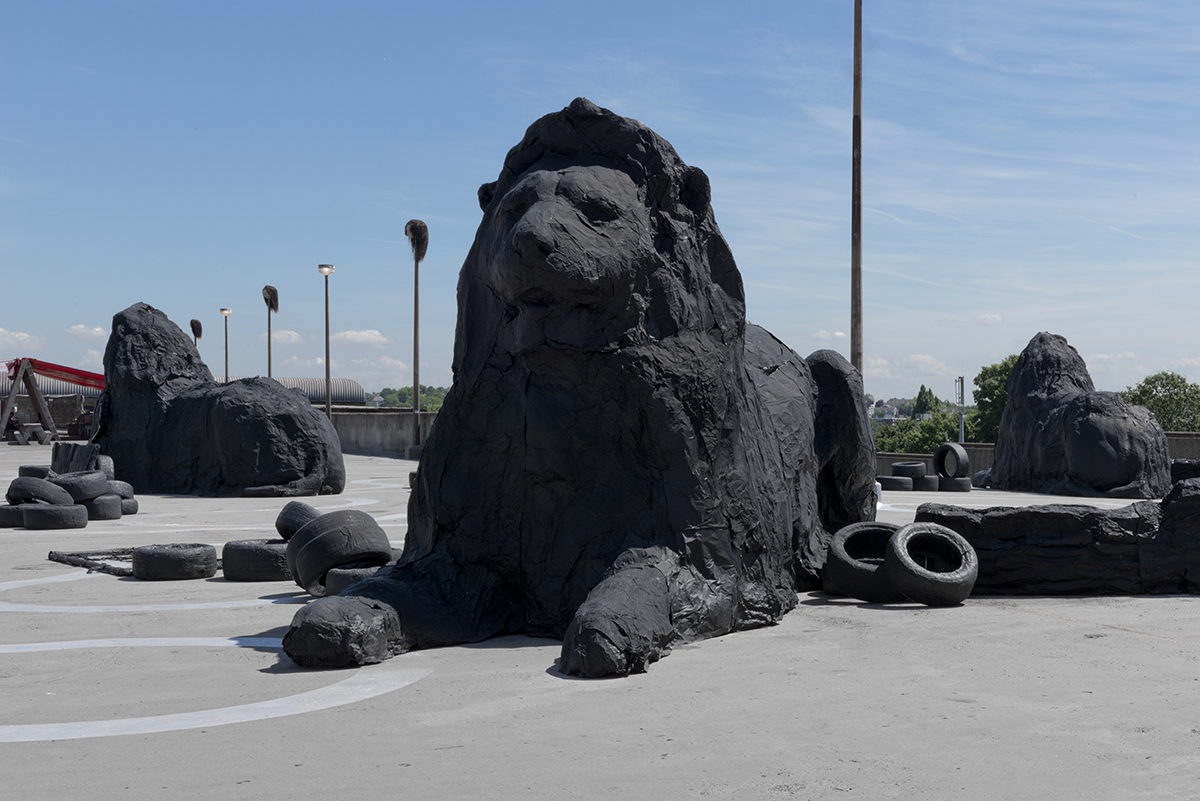 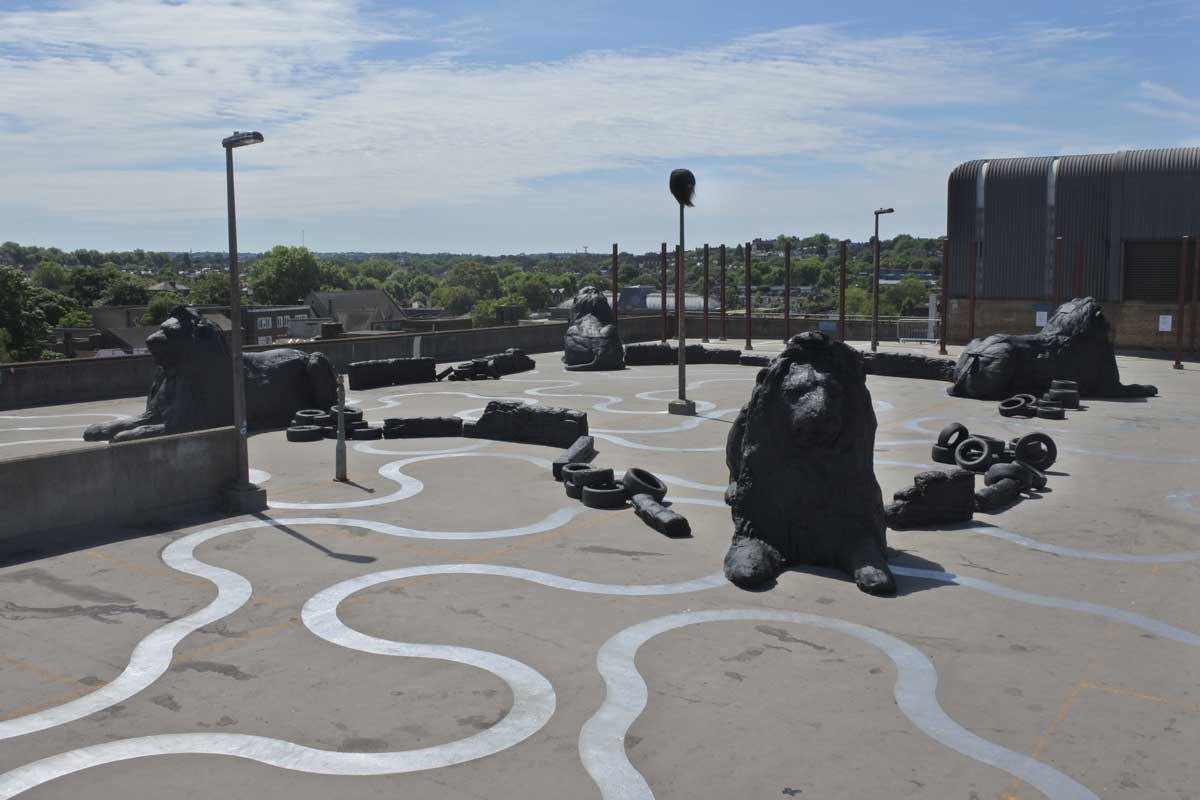 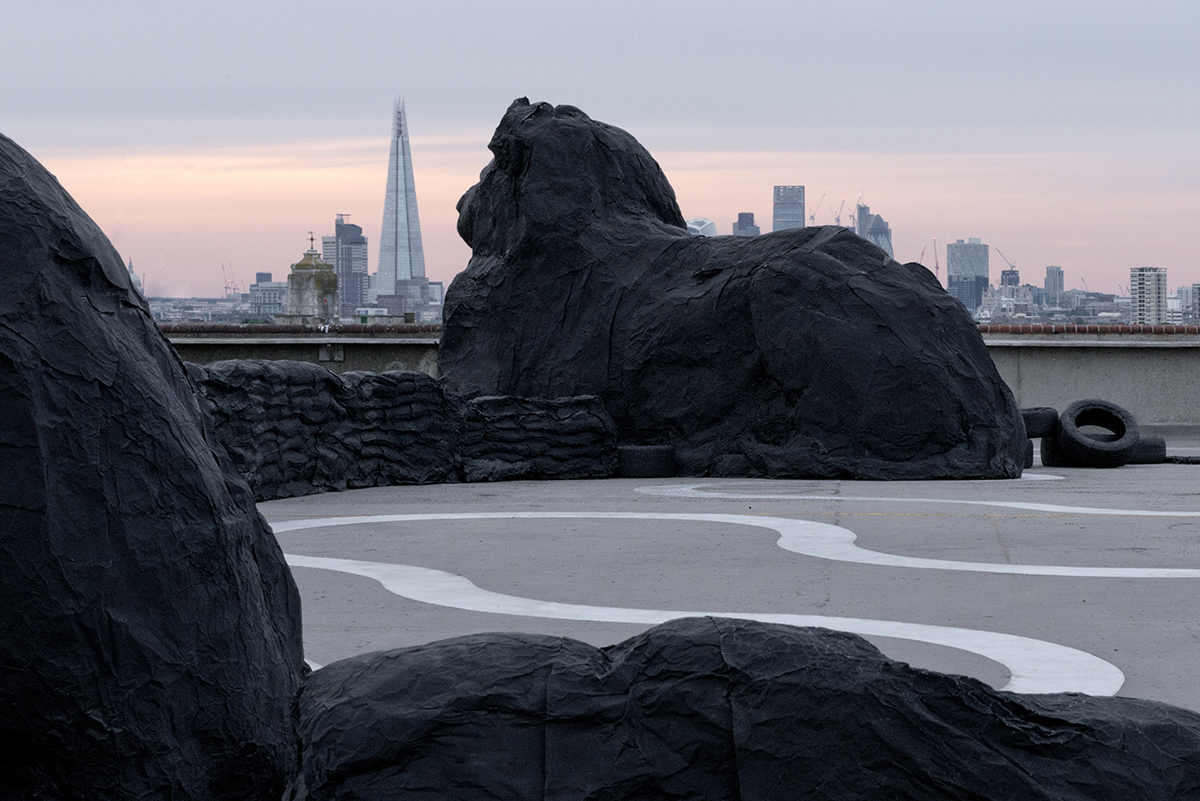 Ewa Axelrad’s long-standing interest in the dynamics  of public disturbance has resulted in a number of reactionary works addressing this powerful contemporary subject.  Her 2017 new sculpture, ‘Let’s go. Yes, let’s go. (They do not move)’, referenced Trafalgar Square, an iconic London meeting point associated with global gatherings and protests.
Situated on the roof of the multi-storey car park, Axelrad’s work directly interacted with Richard Wentworth’s Agora which was commissioned by Bold Tendencies in 2015. Both artists stress the importance of a discourse between art and its local environment and community. Axelrad was inspired by a conversation she had with Wentworth which discussed how urban spaces and decisions are made in order to control public movement and prevent public unrest. Interestingly, in London there is no central square which could accommodate such a protest.

The sculpture in Peckham could have read as a surreal, abandoned site encountered in an unexpected place but also as an enforcement of the Agora, wherein visitors can meet, sit and socialise. The lions at Bold Tendencies are transformed from a monument of triumph and power into domesticated big cats guarding a broken barricade. The work represented the artist’s sense of public disillusion with protests and widespread doubt in their ability to generate real change. The title, taken from Beckett, connects the installation to a theatre stage, the protest acted out therefore, a futile public spectacle.

Axelrad chose cinefoil – a thin black aluminum that is normally used to shape lighting in theatre and film industries – to make the installation fragile and impermanent, creating a clear contrast with the sculptures in Trafalgar Square. Cinefoil was also selected due to the sound it makes in the wind and rain, as well as its tendency to crumple and naturally weather in appearance giving the work a tired, time-worn character.

Ewa Axelrad’s practice comprises of installations, photographic and moving image and sculptural objects. Her research is informed mainly by specific events from the past such as personal recollections and collective memories. She is also interested in the role of aesthetics and design in the interplay of certain social set-ups. She is currently developing a new body of work addressing the notion of esprit de corps; a spirit of comradeship, morale, sense of devotion to a shared goal or fight present in the army, police and across other groups organised around combat.

Ewa Axelrad was born in Poland where she studied at Academy of Fine Arts in Poznań before moving to London to continue at the Royal College of Art. Her work was featured in many exhibitions, among the recent ones are Labour Relations at Wrocław Contemporary Museum, As You Can See. Polish Art Today at the Museum of Modern Art in Warsaw and State of Life. Polish Contemporary Art within a Global Circumstance at the National Art Museum of China, Beijing. Her solo shows in 2017 include Satis at The Ryder Projects, London, Shtamah at Wrocław Contemporary Museum and at Copperfield, London. She is nominated for the 2017 edition of the bi-annual Deutsche Bank Foundation Award Views for Polish artists under 36. She lives and works in London and Gliwice. 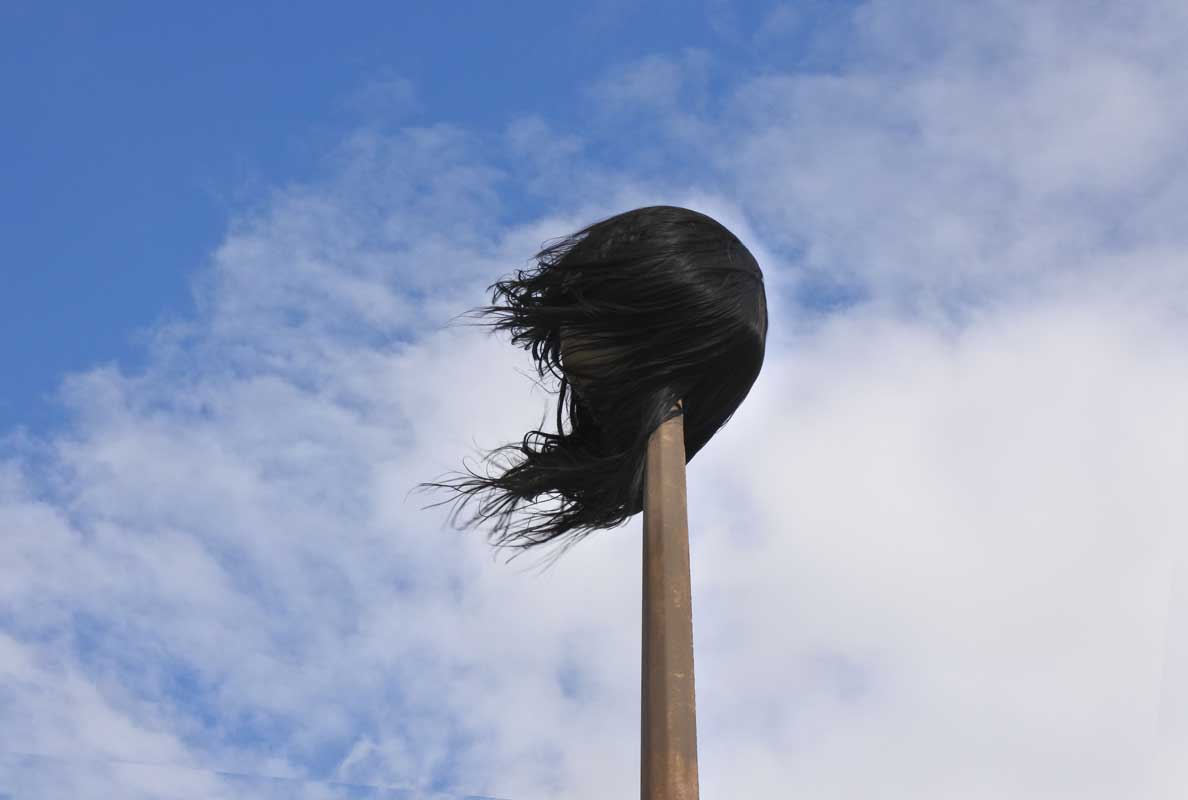 Your image will be weathered but never taken away, 2017

Project sponsored by the National Fund for Arts and Culture 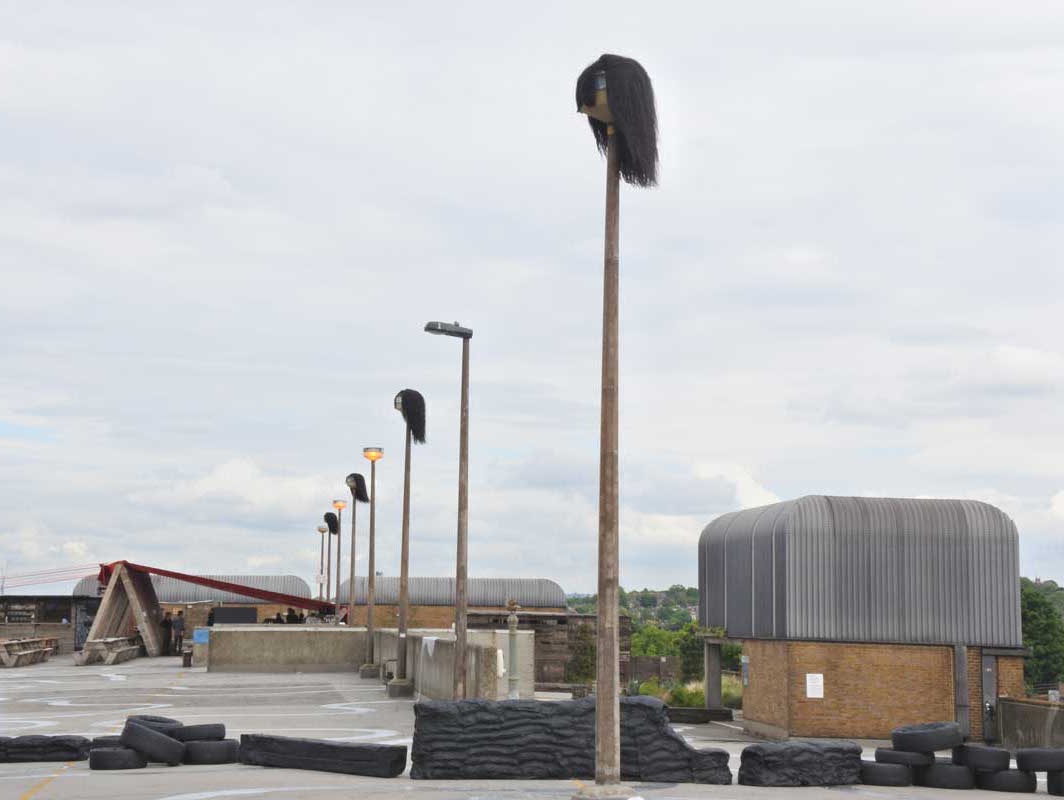 YOUR IMAGE WILL BE WEATHERED BUT NEVER TAKEN AWAY

For the Bold Tendencies 2017 Summer Season, Isaac Olvera installed four giant natural hair on top of four of the nine lamp posts on the car park roof. Over the summer this allowed for London’s weather and climate alter the composition, styling and texture of each one.

An important reference for the commission was the origin and form of the materials used. The human hair came from Mexico and the sculptures were inspired by the hairstyle of Natasha Fuentes Lemus (1974 – 2005), the daughter of Mexican writer Carlos Fuentes and journalist Silvia Lemus.
Since 1990, Natasha’s family split their time between London (living in a house near Earl’s Court) and Mexico City. This history forms a narrative from which Isaac Olvera started a writing performance in the wig shops of Mexico City, capturing the conversations and mixing them with his own reflections on the life of Natasha. The writing was published in script format for the duration of the Bold Tendencies season, setting up a parallel between the characters of those new fictions and the natural alterations of his wigs on the rooftop.

During the 2017 Summer season Bold Tendencies took care of the hair sculptures and monitored changes through a series of photographs, and on some occasions the sculptures had to be washed and combed. The location of the work on the top floor of the car park used, as a formal guide, the linear structure of the lamp posts, allowing visitors to move freely within the space yet identify with a new anthropomorphic form.

During this time the artist spent time in London continuing his writing performances in wig shops. His research combined a examination of the use of hair in medical applications, the harvesting of natural hair and the association of hair with calligraphy, amongst other subjects.

Olvera’s work takes as its starting point the realm of human interactions and their context. By transforming cultural and aesthetic objects into provocations, he examines how to disrupt, de-limit or extend them through writing, video, performance and installation.

How does one translate into univocal signs such a semantic irradiation, such contamination of signs and individuals in the experience of amatory involvement?
Julia Kristeva